What are five rugged men and four stylish ladies in old-school, scratchy bike jerseys on rickety racing bikes doing on a rainy October weekend in a tiny village in the Tuscan hills? Looking for people that share their passion, of course! 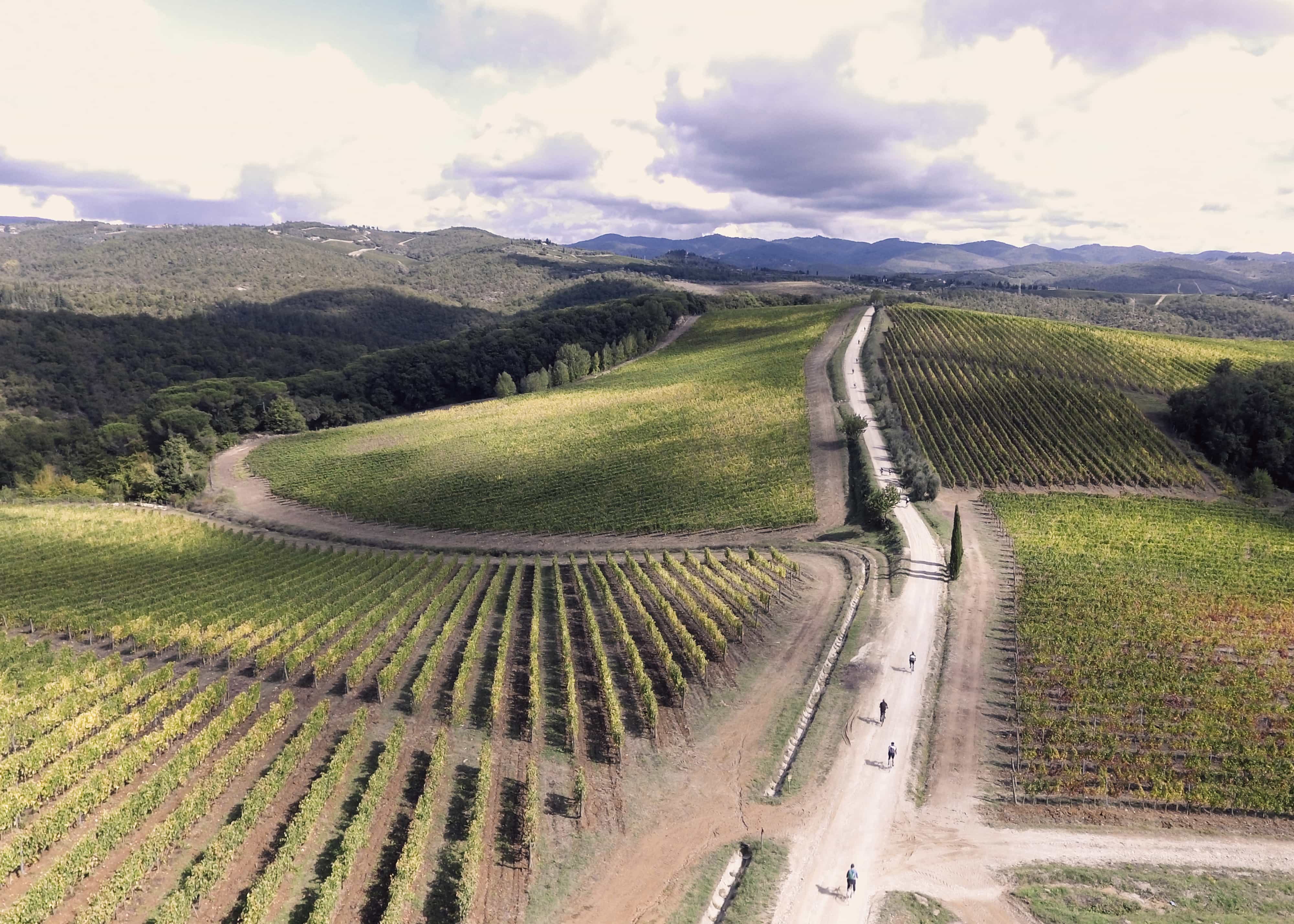 For more than 20 years, thousands of dedicated cyclists from around the world have gathered in the idyllic village of Gaiole in Chianti to participate in La Eroica, a heroic retro bike race on gravel roads in the Chianti hills. The number of participants is strictly limited but the race is open to all genders: the only condition is that racing bikes must be at least 30 years old and the gear just as retro. Merino bike jerseys recalling the glorious era of Coppi and Bartali at the Giro d'Italia are perfect for the occasion.
Back to our nine-person team in damp Merino jerseys: we’ve come from all corners of Italy and Switzerland to Gaiole in Chianti to take on the Eroica challenge.
In the morning, just after 7 am, we meet on the sports field: some crawl out of a camper van, half frozen; the truly hardcore challengers have slept in their cars; and the others arrive fresh-faced after spending the night at a vineyard.
At 8 am, with scratchy blue-and-white jerseys on our backs, the team are at the starting line, full of anticipation. 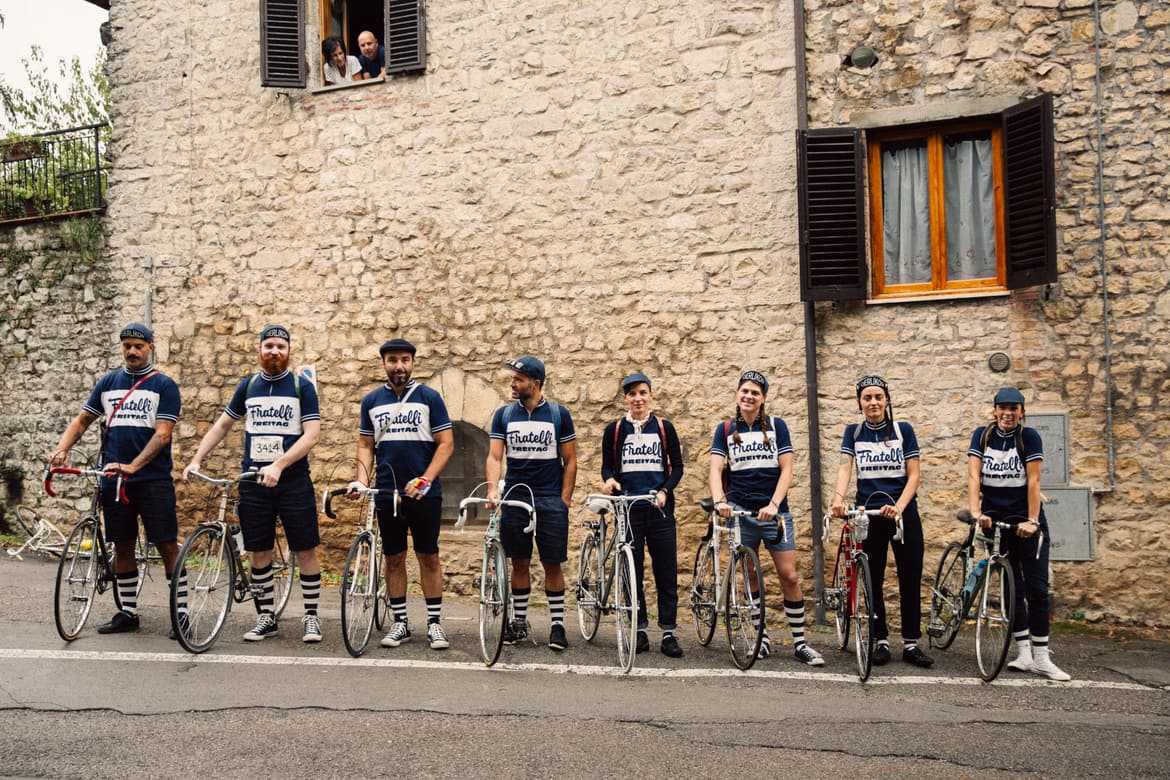 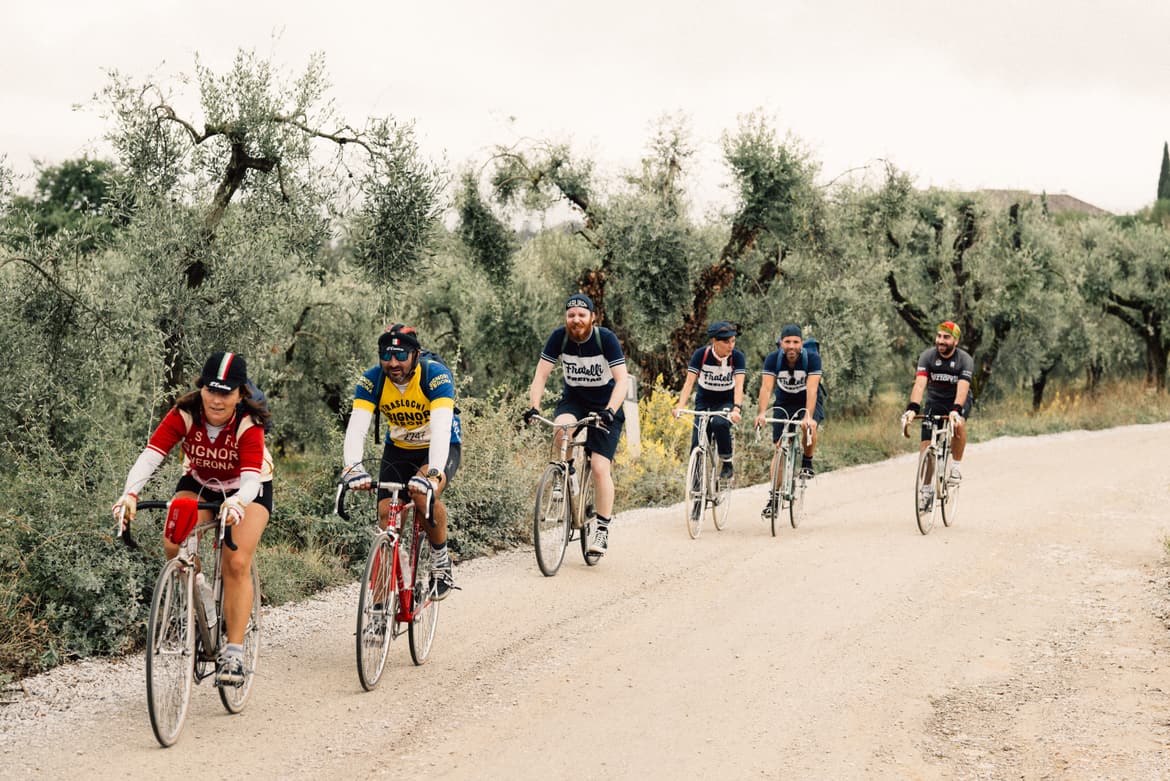 Our team comprises Giamma, the gastronomic surfer from the Adriatic and one of the first F-dealers; Marco, the Milanese expert in all things cycling, gardening and FREITAG-related; Stefano, the Roman pacemaker taking the place of his less sporty brother; Marco, the Florentine redhead with a rickety Bianchi; Teresa, the feisty mother from the Tuscan fishing village of Castiglione della Pescaia; and Susanna from sales bringing up the rear.
Then there are the FREITAG veterans: Marilyn, the Yogi product manager from Noerd; Ollie, the vintage expert; and me, Sophie, ambassador for FREITAG in Italy.
The team begins to pedal, conquering the first Tuscan hill. The difference between the members who spent the last few months hitting the pedals, and those who spent them fueling up on pasta, becomes immediately apparent. 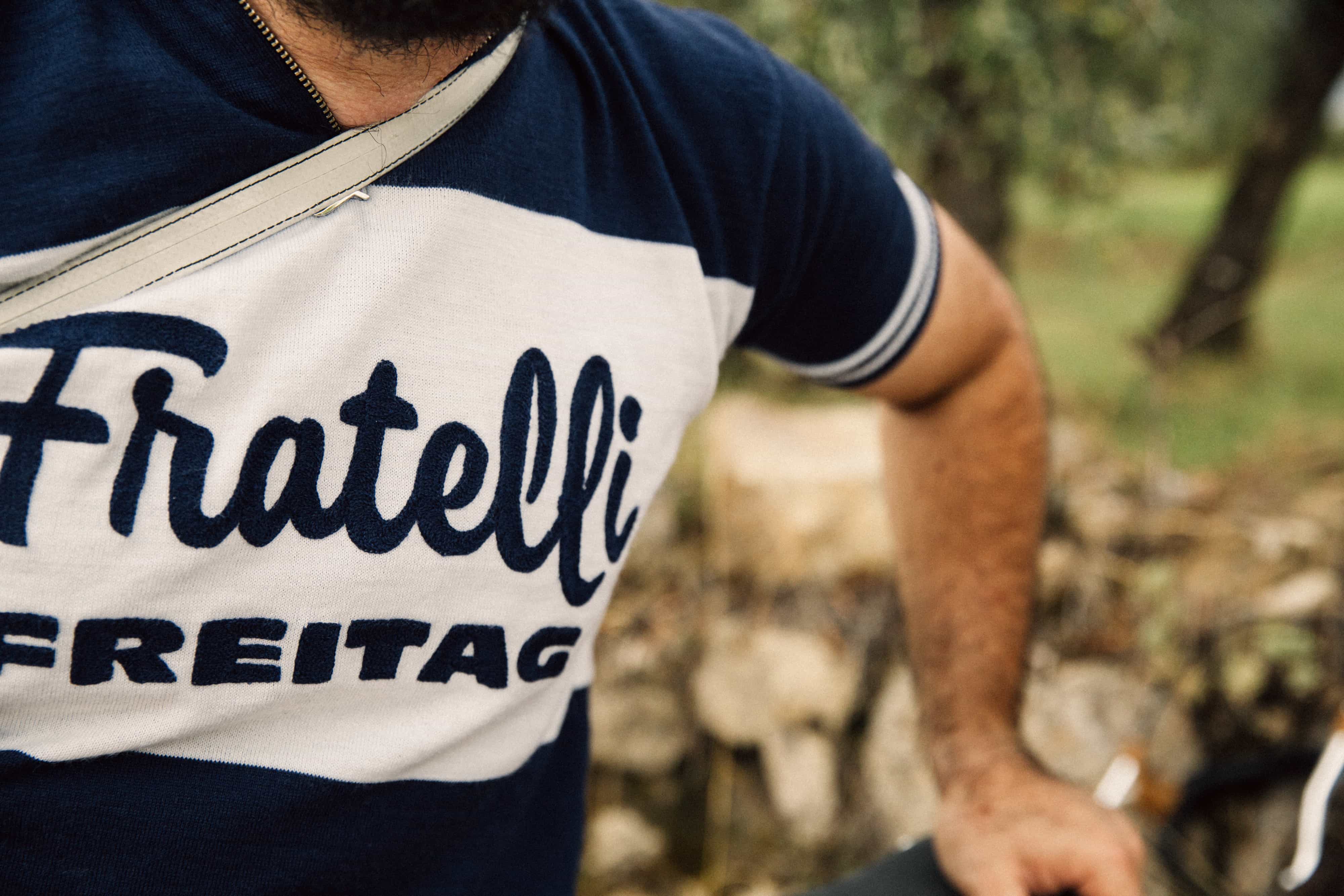 After a short break at Castello del Brolio, the first true test awaits: the ascent of the notorious Strade Bianche. It's rained overnight, which makes it easier for us to overcome the gradient. At the top, we are greeted by thick clouds and a fresh breeze – exactly what we need after the strenuous climb.
The team starts to spread out as each finds their own rhythm, and the duels and attacks begin. Teresa uses the men's slipstream to pass them by with ease – it’s her second Eroica, after all.
The team has support, too: our broom wagon, a 1984 Vespa Piaggio PX 200E, accompanies us, with photographer Gianmarco skilfully navigating the gravel roads while blindly taking one-handed shots of the race.
The difference between those who spent the last few months hitting the pedals, and those fueling up on pasta, becomes immediately apparent.
Shortly after 11 am, we take stock of the situation: no flat tires; Susanna is keeping up despite increasing tiredness; Marco is pelting down the gravel paths ever more fearlessly; Teresa’s night in the car seems to have not affected her in any way – in fact, she looks more radiant with every kilometer. Only Gianna's bike is looking a bit frail. Now the first rays of sunshine appear, just in time for a break at Ape Piaggio, where a farmer delights us with his offer of chianti, rye bread and homemade salami: the perfect fuel for the next bumpy slope. 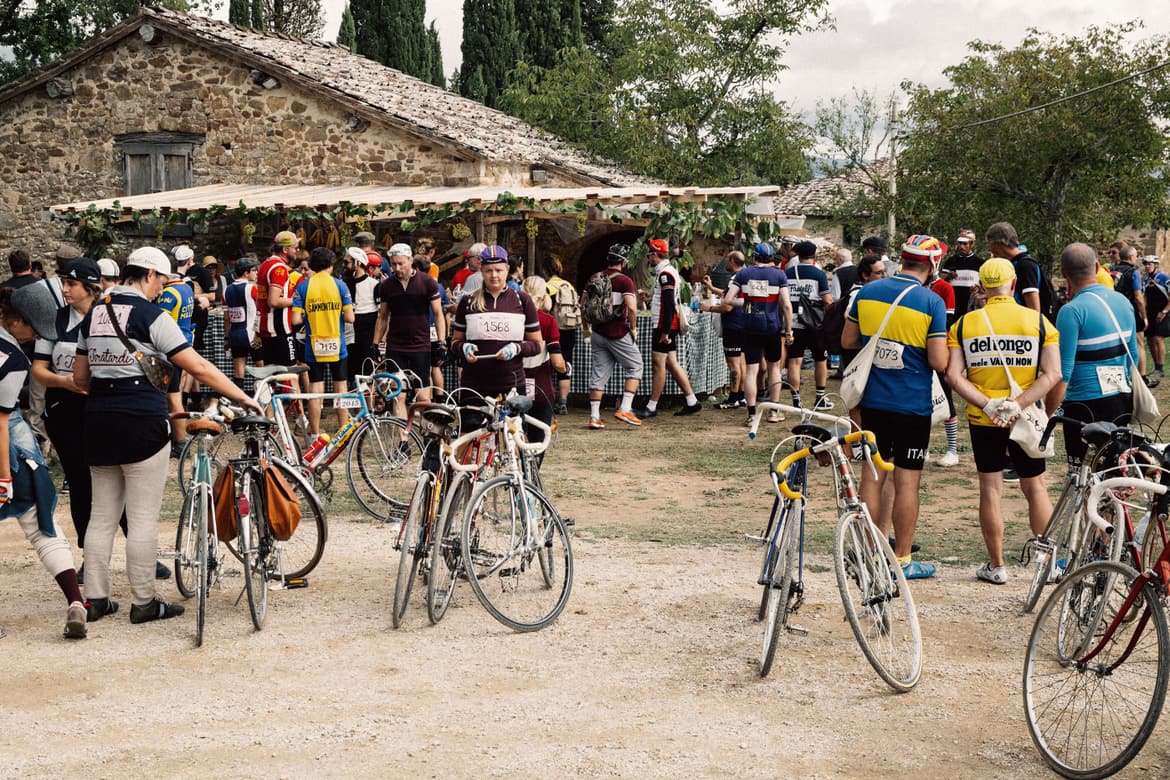 After 32 km we reach Ristoro, where the faster cyclists have luckily left us some bread with oil, sheep's cheese and salami. We manage to secure a table and have a glass of wine as we enjoy the rural Tuscan panorama. A shaggy donkey and olive groves set the scene and we can see the cypress-lined Strade Bianche on the horizon.
After the gastronomic intermezzo, we're raring to get back on the road. The scorching sun has dried out the Strade Bianche, throwing dust into the air and down our throats, but luckily the final kilometers lead us down asphalted roads through shimmering golden-red fall forests. We gather the last of our strength for the final sprint. At the finishing line, a cheering crowd is ready to celebrate with us. Finito! 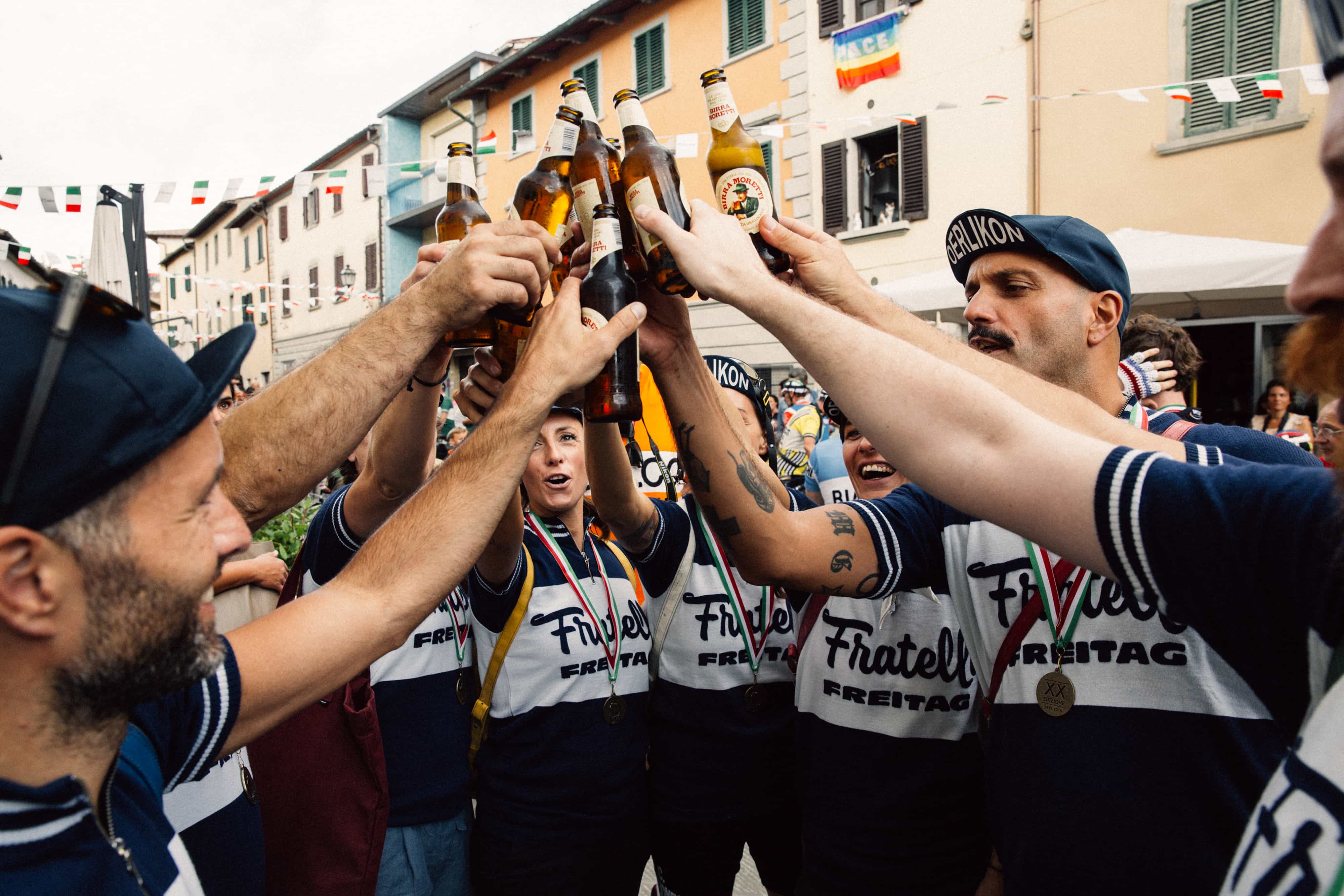